State of the Art: The ODEON AUDIO Carnegie shows what is possible as a speaker using spherical wave horns. With an enormously high efficiency of 97db, the speaker can be driven by any high-quality amplifier concept. Even low-power triodes (like 300B and 2A3) drive this speaker with ease and produce a controlled and intense bass response. The Carnegie turns music listening into a live event: opening up the listening environment where voices and instruments can be experienced in lifelike sizes. The listener forgets the loudspeaker and merges with the music.

To keep the deviations between the channels as small as possible, we use selected components for the crossovers with a maximum deviation of only one percent. Oil-paper capacitors from Jantzen, Miflex and Duelund are used. The inherent sound of these capacitors is openness and harmonizes perfectly with the sound character of the ALNICO midrange and tweeter used. For a more direct saturation of the capacitors and the resulting faster signal processing, many capacitors are connected together in the Carnegie and equipped with bridge capacitors. The flat coils used come from the Mundorf company in Germany. Only non-magnetic components are used as resistors.
In most loudspeakers in the high-end range, the crossovers are built on silicon boards and the individual components are connected by conducting paths. In contrast, the Carnegie crossovers are wired by hand, soldered point to point and then mechanically secured to prevent movement of the sensitive components and thus negative influences on the sound. The point-to-point wiring minimizes electrical transitions in the signal path. What is regarded as a quality feature in high-quality tube amplifiers is rarely implemented in loudspeaker construction as consistently as in ODEON AUDIO products.

The tweeter is a new generation of 1″ compression driver with ring radiator technology. The 38mm Mylar diaphragm used in the pressure chamber driver is driven by a particularly strong neodymium magnet, which guides the voice coil with a magnetic force of 2.4 Tesla. The result is a driver that guarantees highest resolution and ultra-fast reproduction.
The systems used are measured after long running-in times and are hand-selected in pairs. The extended reproduction of the highest frequencies gives the rest of tonal range that special quality. With a linear transmission of almost 30,000 Hz, the Carnegie covers a frequency band that is significantly extended upwards. This accurate reproduction of the uppermost frequency spectrum allows a lifelike reproduction of the overtone range. The overtone range is crucial for the differentiation of instruments. Thus, unlike other loudspeakers, the Carnegie makes the distinction between a Stradivari and a Guarneri violin possible. These qualities are supported and significantly enhanced by the use of the ODEON AUDIO birch multiplex horn. The 22cm measuring horn acts as a mechanical amplifier, which relieves the tweeter and thus contributes decisively to a relaxed sound character with the highest possible resolution.

The handmade 13cm midrange drivers come from a German manufacturer. They combine a modern aluminum die-cast basket and a powerful ALNICO magnet with a magnetic force of 1.4 Tesla as well as an ultra-light cellulose membrane in NAWI (non-unwind able) form. This hyperbolic membrane shape, in contrast to the conventional cone shape, ensures a more even movement and load on the membrane during long strokes and thus prevents parasitic vibrations that can lead to erasure effects. In addition, a very fine, centering and the one-piece construction of cone and surround ensure an accentuated, controlled and fast movement of the midrange driver. Instead of a rubber surround connecting the cone to the basket, the multiple folded edge of the cone takes over the function of the surround. This prevents back reflections between cone and surround. The excellent mass to drive ratio and the special design of the system allow the signal to be generated faster and make the midrange driver used one of the fastest ever built of its kind.
This system is installed behind a 42cm ODEON AUDIO spherical wave horn made of layered birch multiplex. The horn relieves the midrange driver decisively and enables an even faster signal processing and thus highest fine dynamics.

A paper woofer from Audax is used in the bass range. The system has a diameter of 38cm. The relatively light cone is driven by a very strong, oversized ferrite magnet. The result is an efficiency of 97db.
The power, speed and ease of reproduction are exceptional and create a lifelike intensity. The woofer works in a 60cm measuring waveguide, which supports the basic tone range and ensures a clean take-over of the midrange driver at 450 Hz. The result is an extraordinary plasticity in the lower vocal or fundamental tone range.

Like all ODEON AUDIO floor standing loudspeakers, the Carnegie uses a downward firing bass reflex system with the bass reflex tunnel pointing downwards to the base plate of the speaker. This base plate forms the end of the reflex opening enabling a greater choice in optimum room placements, which allows a placement close to the wall.
Every room has so-called room modes. as a result, strong bass peaks often occur. The downward firing bass reflex system stimulates these room modes much less than conventional solutions in which the reflex tube faces the rear wall.

The housing design ensures ideal phase alignment, as all systems are positioned exactly on one axis. At Carnegie, the two-piece cabinets are made of 24mm thick multiplex.
The cabinet materials used are decisive factors for the sonic properties of low and mid-range reproduction. Multiplex is the preferred material when it comes to implementing special loudspeaker concepts. The plywood, which consists of many cross-glued individual veneer sheets, is particularly stiff and therefore very low in resonance and eliminates discoloration effects. The material thickness used by our master craftsmen ensures a stiffness that absorbs even the enormous forces of the 15″ woofer at any volume without any inherent movement. The asymmetrical cabinet prevents standing waves. This allows the use of less damping material and thus the maximum preservation of the extraordinary efficiency.

Carnegie uses a particularly pure 7N copper cable from Japanese production, which is drawn in a continuous casting process in a single crystal structure. The mechanical and electrically shielded cables virtually eliminate the possibility of interference. The woofer is supplied with a cross-section of 8 mm2. The required cross sections in the mid and high frequency range are made of individual Teflon-insulated solid core cables. To ensure interference-free contact, Carnegie WBT Nextgen loudspeaker terminals are made of pure gold-plated copper. Due to their design and the low material usage, they suppress eddy current effects that usually occur with plug connections. The WBT terminals are mounted on acrylic plates which accommodate the crossovers and thus connect terminals and crossovers directly with each other.
The intensity of the tweeter and midrange drivers can be adjusted to the individual listening taste and the respective room situation via plug connections on the acrylic panel. Unlike the frequently used metal, the selected carrier material, acrylic, has no negative influence on the tonal properties of the components of the crossovers. Metallic carriers promote eddy current effects and generate electromagnetic fields that strongly affect the function of the components. 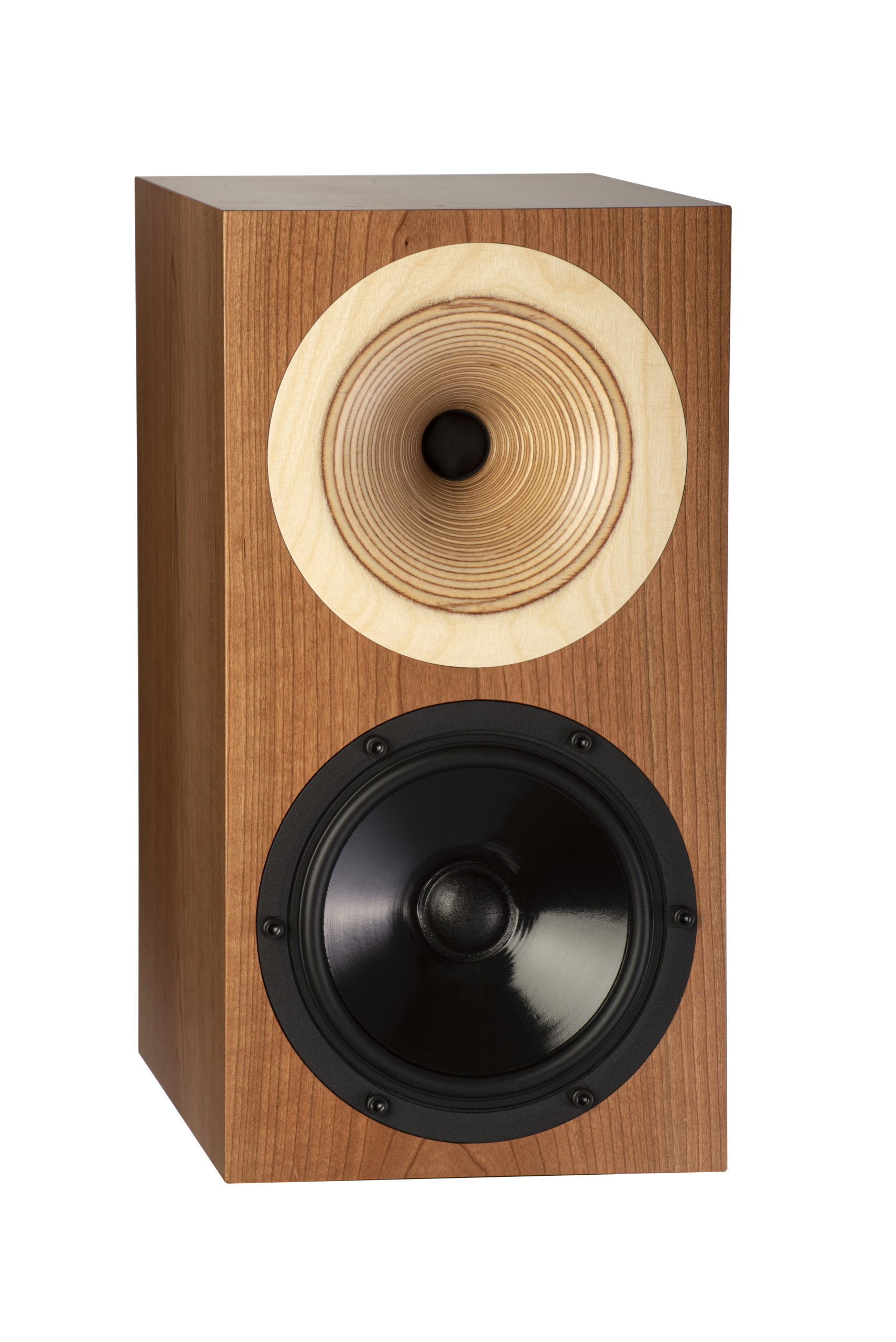 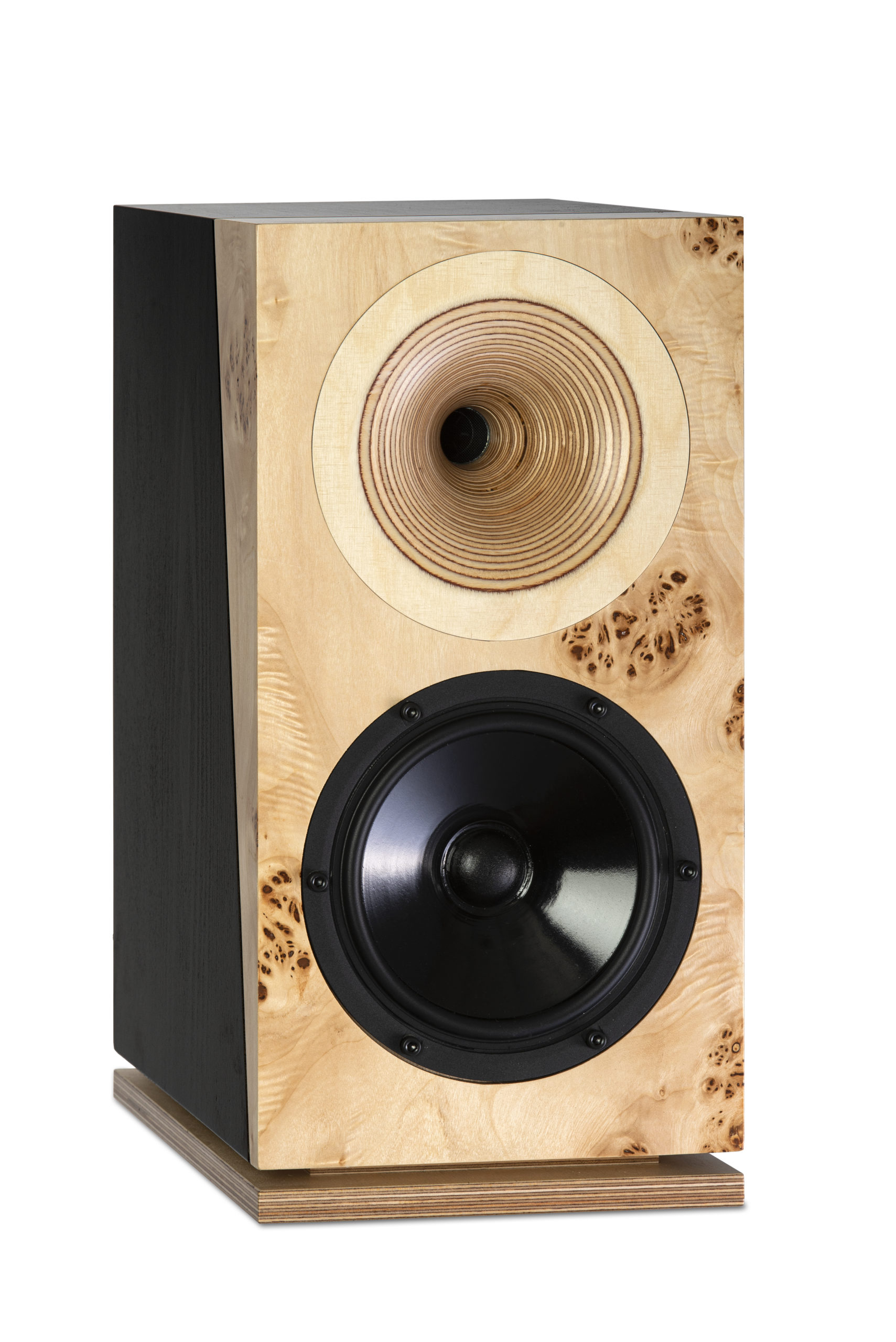 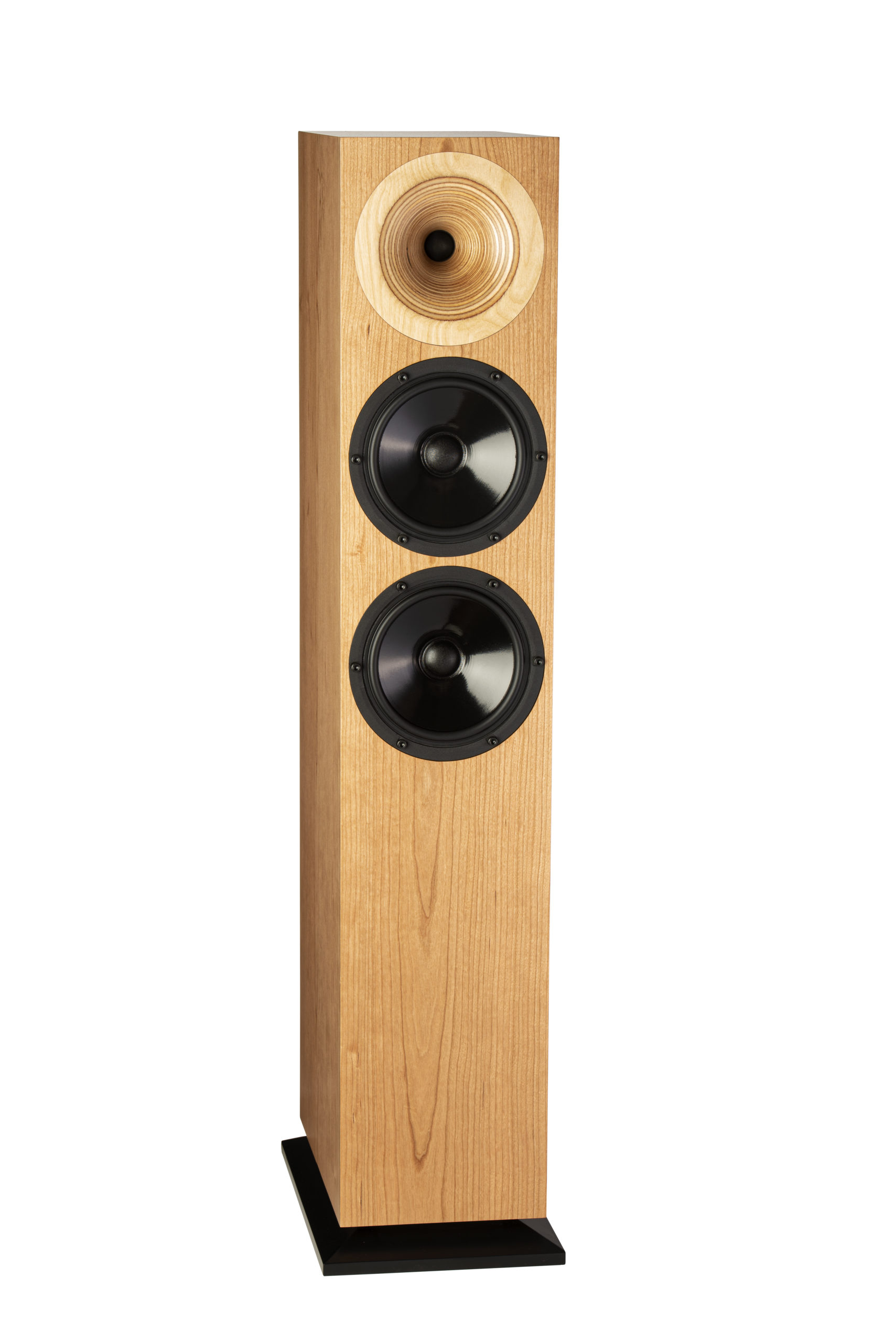 compact floorstanding loudspeaker with an outstanding efficiency of 95 db 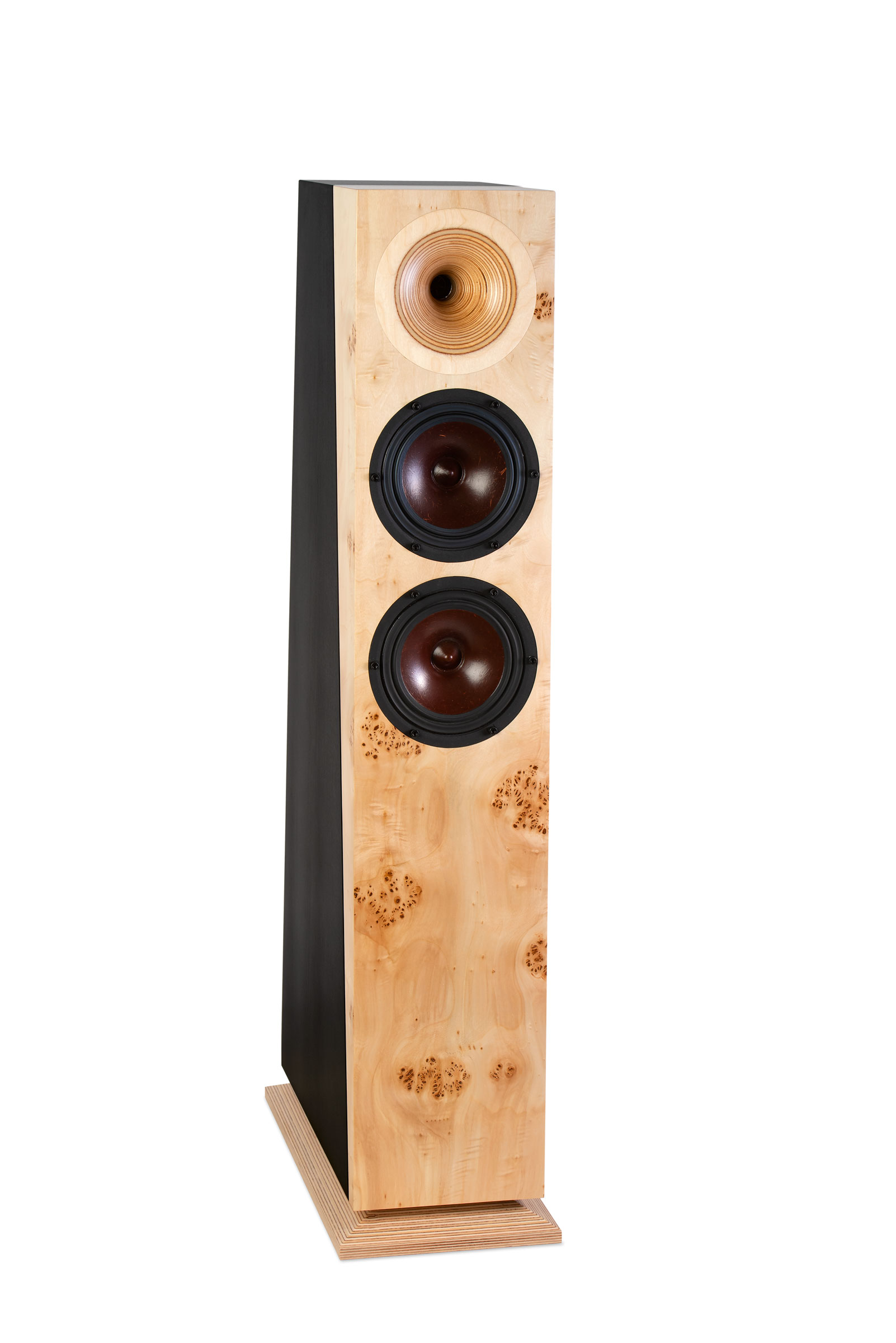